All My Friends Are Pen Pals 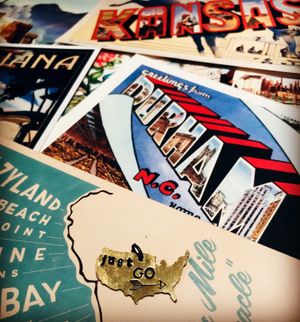 It used to be when someone moved to a new state, I could promise a visit sooner than any other friend could make it out, touring as I do. One time, I made good only three days after they put the cross-country drive in park. I had comp tickets waiting for them at will call before they could unpack.

“All my friends are pen pals,” I explained recently in a letter to one of my pen pal friends. Some of my closest folk are in Los Angeles, Reno and a small town in Indiana … let alone the ones for whom “home” is wherever the vans are parked. And if they’re local, I’m leaving them all the time for the next tour. We are all busy people who hate small talk and would rather spend three hours straight on the phone once a year than hours a day with a distracted chat in the background. And if they do prefer more constant conversation, they’ve accommodated my misanthropic nature because I’m entertaining enough to make up for it. Quality of conversation over quantity. Which also means that sometimes they get a five-page handwritten letter when I’m in the mood. I sent my former housemate’s young daughter upwards of 80 postcards over my years on the road, increasing their complexity from a few words in thick black Sharpie to full paragraphs in fine black micron drafting pens as she learned how to read. Postcards and letters allow you to speak AT someone when YOU want to. Kind of like songs.

“Why don’t you write a book?” people inevitably prod.

There was a time I thought about writing a non-fiction book about the nature of the American Road Trip. I had a theory that it had a specific character … different from conquest or planting a flag. Something purely exploratory, a generational rite-of-passage re-discovery of the land. We all hear varying insistence in the call of the road; Some for one summer vacation and others ... that urge for going that keeps us geographically unsatisfied and fantasizing about living simultaneously in the Wyoming prairie utterly alone and smack in the middle of the French Quarter. I reasoned that Lewis and Clark and their crew, known non-threateningly as the Corps of Discovery, might be considered the “first” American road trip. Then you have Kerouac’s On the Road … iconic, but I always preferred Ernesto Rafael Guevara de la Serna riding through five South American countries in The Motorcycle Diaries. Well before he wrote The Last Unicorn, Peter S. Beagle took a cross-country journey in one of my most earmarked books, I See By My Outfit. My beloved Ernie Pyle, wanderlust’s journalistic poster boy, went everywhere from the Hawaiian leper colony to the Yukon to tell the magical stories of average Depression-era Americans. If my house was on fire (and I knew everyone was safe) I might grab his out-of-print book, Home Country, and my guitar as I ran out.

… The travel writings of Bill Bryson … The evolution of Route 66, where Glenrio to San Jon is still a gravel road and the Jericho Gap in Texas is still dirt. Or the romantic wayfaring of Hobo, by Eddy Joe Cotton, stowing away in box cars in 1991. Now you see it, my bookshelf: Volumes of travel diaries like railroad ties. 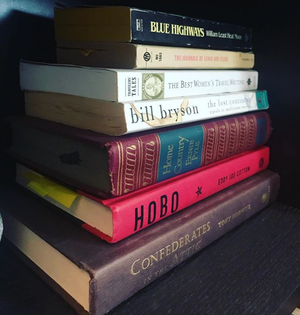 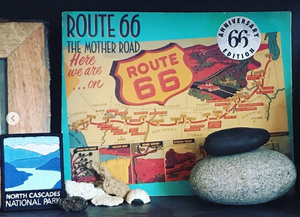 Of course, you grow up and everything is more complicated than a charming gap year backpacking across the west. Lewis and Clark’s expedition studied the (native/stolen) lands acquired in the 1803 Louisiana Purchase and low-key sought a water route to the Pacific to increase trade opportunities. Oh, and Clark brought his enslaved man along. Disciplic followers of Chris McCandless have always rankled at me; He was philanthropic, yes, but incredibly privileged and naively unprepared for the journey that ultimately claimed his life in an abandoned Alaska school bus (that then had to be removed because two hikers died and at least 15 had to be rescued just trying to reach it). “Eddy Joe Cotton” is a folksy pseudonym. A lovelorn Guevara goes on to become controversial Marxist guerrilla commander, Che. And America … I mean … what isn’t naïve, a pseudonym, controversial … or untarnished by conquest? 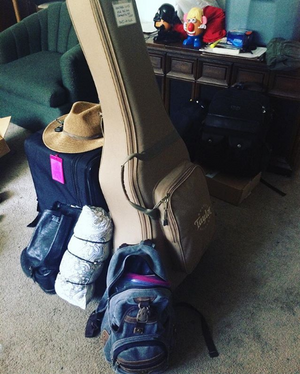 Travel is company in and of itself. I have felt closer to landscapes than people, at times. I have felt more understood by a boulder than another human being. And I have felt more in the presence of God … not in even the most stunning cathedrals of this country, but witnessing something in a distant town that I had to be there in just that moment to see. I pulled over from a 14-hour solo drive to eat a piece of pizza by a Great Lake and witnessed a lightning storm competing with the 4th of July fireworks display. I’ve been the last tent camper of the season on a 39-degree night. I woke at 4 a.m., as my bandmates slept, to see the blood moon eclipse in a blackness unmarred by a single porch light in a land where they say moose are the exception to every fence.

And I have been overjoyed to be alone to see those things … to possess something only I can tell you about during that once-a-year phone call, or in that five-page letter, or in that song. I’ve never had much currency but the interpretation of experiences. Once, when I had nothing more to give, I wrote a friend a letter sharing something incredible only I had seen and gave it as a gift entirely to her, telling no one else. 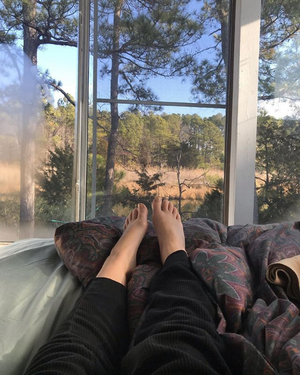